If there’s an operative word that describes golf here, it’s spacious. The area’s windswept coastal layouts bring steady sea breezes into play while its expansive inland tracks are rarely hemmed in by housing developments or highways.

North Carolina-based golf course architects like Tim Cate (based in Sunset Beach) and Rick Robbins, and brand names like Arnold Palmer and Rees Jones, were given carte blanche to work their magic over natural canvases.

The result is a golf destination that keeps avid players with deep appreciations for the game coming back year-after-year. 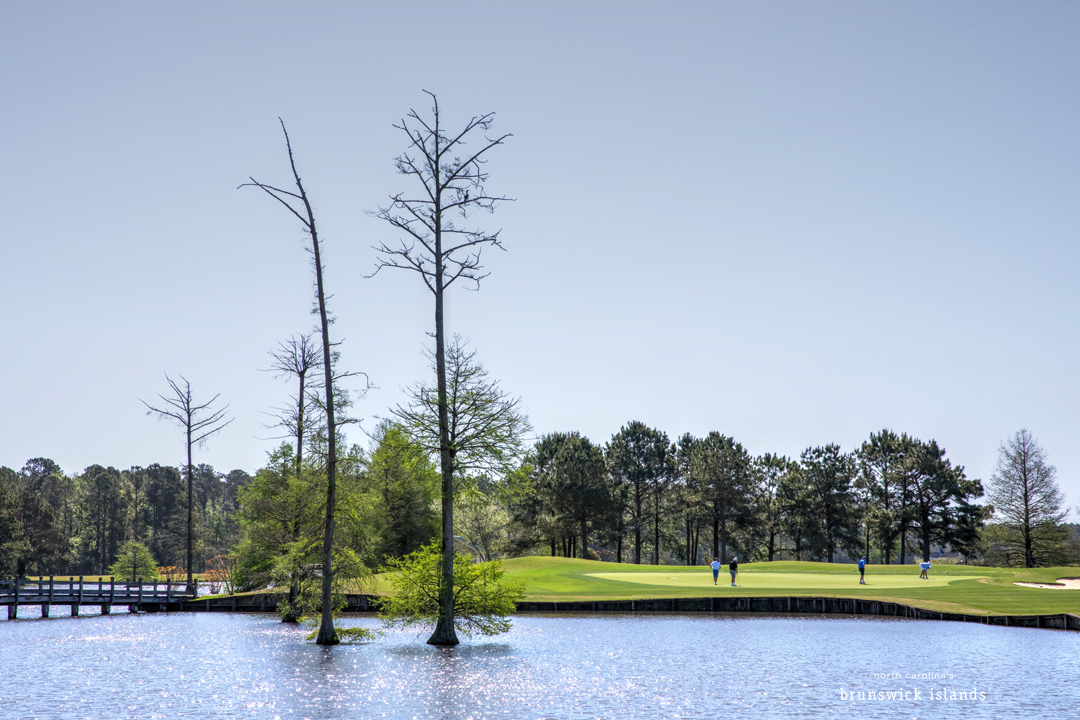 Heading north on U.S. Highway 17, golfers first come upon the fishing hamlet of Calabash (the seafood capital of the world) and Sunset Beach, the smallest of Brunswick’s barrier islands. What it lacks in girth, south Brunswick County more than makes up for in golf with 12 of the area’s 30 courses.

Golfers tee off in South Carolina and putt out in North Carolina. Approximately 250 yards from the back tees in the middle of the fairway is an encouraging placard reading “525 yards to go.”

A mere five-iron away is Farmstead’s sister course, Meadowlands Golf Club, also owned by the McLamb family. Opened in 1997, it’s praised for its consistently solid conditioning, straightforward design and overall value. The Cracker Barrel-style front porch wrapping around Meadowlands clubhouse is an idyllic spot for sipping on a post-round libation.

The 27-hole Brunswick Plantation Resort and Golf – a Byrd-Clyde Johnston collaboration – is also a crowd pleaser with punching power. For those on a budget or looking for an affordable warm-up round, head to Carolina Shores Golf and Country Club conveniently located off U.S. Highway 17 just over the border.

If there’s a common thread to this southern gateway to the Brunswick Islands, it is “bang for the buck.” In February and early March, rates at Farmstead start at $74, Meadowlands at $64 and Crow Creek at $49, Brunswick Plantation and Carolina Shores offer rates start at $35 to $45, respectively.

For golfers who appreciate local history, no swing through Sunset Beach is complete without a round at Oyster Bay Golf Links. The county’s first championship-caliber course, architect Dan Maples’ routing takes full advantage of the property’s setting along the Calabash River. Water is in play on 15 of 18 holes, including two island greens.

The Brunswick Islands caught the multi-course wave that rolled through Myrtle Beach in the ’90s and early 2000s. Its southern tier serves a handful properties for have-clubs-will-travel types who prefer 36-holes a day, a beer and a bed.

The Pearl Golf Links is home to the Pearl East and Pearl West courses, both Maples designs. The twin-bill is the centerpiece of stunning, 900-acre swath of marshland along the Calabash River. Both layouts are postcard ready. West is more open off the tee, boasts a links-style feel and flaunts four closing holes which seem to melt right into the river. It recently re-opened with new MiniVerde Bermuda grass greens, also in play on Pearl East.

Keeping with the multi-course theme, The Thistle’s three nines – Stewart, MacKay and Cameron – raised the bar around the Brunswick Islands upon opening in 1999. Cate crafted all 27 holes, and many consider The Thistle to be his seminal work. The overall design is bold – and at times modern – yet still manages to pay homage to the original Thistle Golf Club in Leith, Scotland.

Each nine is has its own character; however, open green fronts, mounded fairways and ever-present wind off the Atlantic create a links aesthetic throughout all 27 holes. Thistle’s 16,000-square-foot clubhouse is a must-see with 200-year-old memorabilia from the original club and a tempting list of single-malt scotch to sample.

Twenty-seven holes are also the modus operandi at Sandpiper Bay Golf and Country Club in Sunset Beach. Course enhancements in 2015 and 2018 returned the three Maples-designed nines to form. Forty acres of lakes keep golfers honest and engaged as they navigate the Sand, Piper and Bay nines. 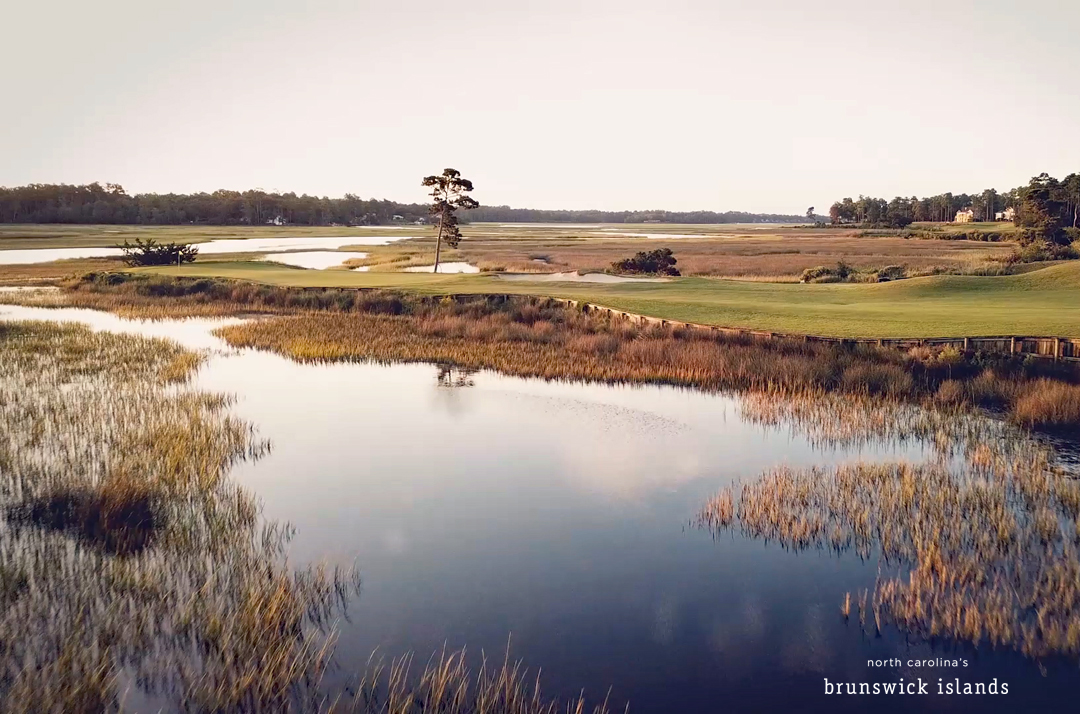 Ocean Isle Beach is a favorite with families, beachgoers and surfers. In golf circles, it has long been synonymous with The Big Cats of Ocean Ridge Plantation. This formidable foursome features Leopard’s Chase, Tiger’s Eye, Panther’s Run and Lion’s Paw. The sheer quality and quantity of golf at Ocean Ridge has attracted golfers and large golf groups for 28 years.

Leopard’s Chase opened in 2007 to critical acclaim and is the newest to the litter. This Cate design is characterized by dense, L-93 bentgrass greens, man-made lakes, native areas and grasses all bound together by a network of winding, wooden bridges. It’s par-4 18th hole is one of Brunswick County’s best finishers with an elevated green guarded by a waterfall cascading down a wall of coquina boulders.

It was Tiger’s Eye, though, that cemented Ocean Ridge Plantation’s place on the Brunswick Islands golf map when it opened in 2000. Cate’s early piece-de-resistance is a visual cornucopia of locally harvested coquina boulders, waste areas and native grasses. Golfers tend to remember par 3s, and Tiger’s Eye’s collection of one-shot holes rival any course in the region if not the state.

Panther’s Run (Cate’s first solo design) and Lion’s Paw round out the lineup.  The former installed new TifEagle Bermuda greens in 2018 for the same superior, heat-tolerant putting surfaces as Tiger’s Eye. Golfers would be wise not to discount the older cats at Ocean Ridge. Both layouts hold their own as brawny Lion’s Paw stretches to just over 7,000 yards with a daunting 132 slope.

Shallotte is Brunswick County’s center point, making it ideal to access courses to the north and south. It is also home to one of the region’s premier 18-hole facilities, Rivers Edge. The Arnold Palmer-designed layout opened in 2000 amid the county’s (and country’s) golf boom. The King was handed a stunner of a setting along the Shallotte River with seven holes playing along its banks.

The river marsh runs along the entire left side of No. 9 and juts in again at the end of the fairway to keep longer hitters honest. The razor-thin green guards against going for it in two and forces a layup to a narrow landing area. The short approach shot is still a knee-knocker; the putting surface is a mere 15-yards across.

The 17th features a split fairway that makes it reachable in two from the right side, but from the left fairway, it is a true, three-shot par 5. The river is omnipresent on the right and a strip of marsh guards one of the most beautiful green complexes in the county flanked by two live oaks. Rivers Edge’s waterfront clubhouse is an awesome spot to unwind and watch other players navigate the 9th and 18th holes.

A true hidden gem rounds out the mid-county rotation. Lockwood Folly in Holden Beach is home to one of Brunswick’s most photographed holes, the par-5, 500-yard 18th with views extending out to the ocean. The Byrd design also sports a new clubhouse and Sunday Bermuda grass greens. 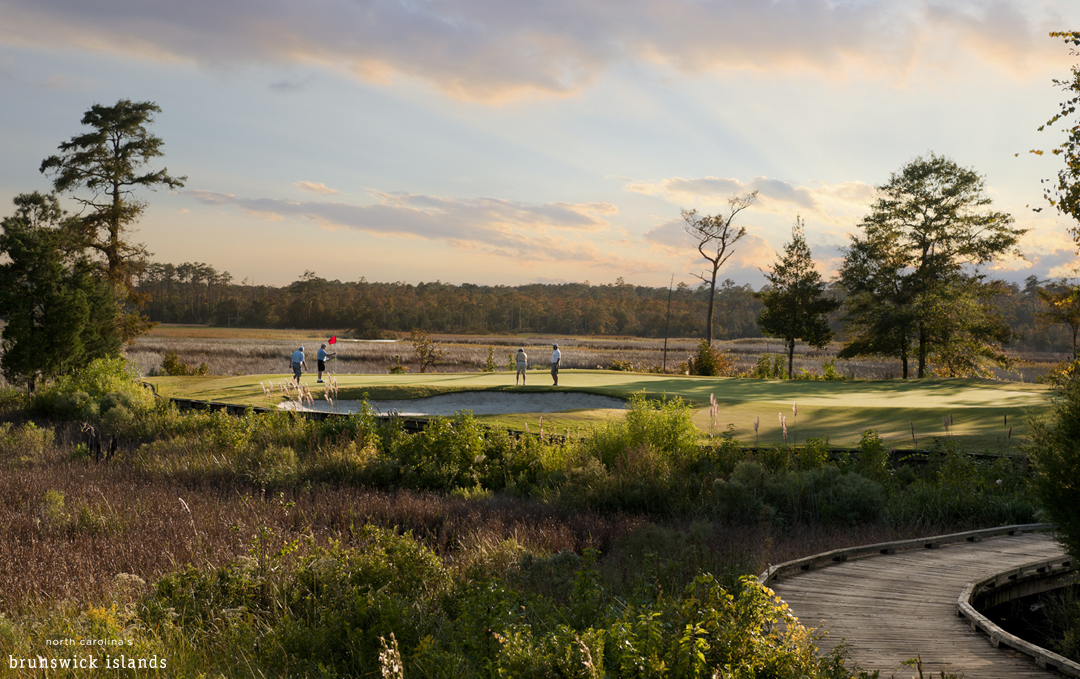 The three nines – Egret, Heron and Ibis – flow seamlessly together, much like “Boom Boom’s” silky swing. The Lockwood Folly River forms the backdrop and six holes play along it. The longstanding Carolina National special is the “Freddie” that packages 18 or 27 holes, lunch and two beers.

Golfers looking to pick up a few more rounds in the inland region have a couple options. The Lakes Country Club in Boiling Spring Lake advertises the “simplest daily guest rates” in North Carolina. With year-round fees from $21 to $33, who are we to argue? At 6,200-yards with slope of 108, Olde Fort Golf Club helps jet- or car-lagged travelers ease into their Brunswick County golf experiences.

There is no such thing as a trip out to Bald Head Island Club to play golf; it is an experience. First, there is getting there, accomplished via a 20-minute ferry ride from Southport. Second, there is access that’s limited to members and guests in the peak season (Memorial Day to Labor Day). Third, there is leaving which is nearly impossible to talk oneself into.

The classic George Cobb design was completely overhauled by Cate in 2012, and for all intents and purposes, is a new golf course. Cate worked off Cobb’s original drawings, but added his own touches, including multi-tiered tees, expanded and raised green complexes, and landscaped dunes. The par-3 16th showcases Cate’s full range with new tees, green location, and a coastal dune and bridge over an enlarged three-acre lagoon.

In the shoulder and off-seasons, Bald Head Island Club makes a limited number of tee times available via local golf-package providers. In season, guests rent homes which carry a “full” or “lifestyle” membership to snare a tee time. Ask anyone who has played “BHIC” and he or she will say it is more than worth the extra effort.

Getting “golf ready” for BHIC is made easy at two venues on neighboring Oak Island and Caswell Beach. The storied Oak Island Golf Club is a circa 1962 Cobb design that puts the “hidden” in hidden gem with an oceanfront location on the far eastern side of the island. Oak Island Par 3 at South Harbour is a lovely little venue where junior golfers play free with two paying adults. 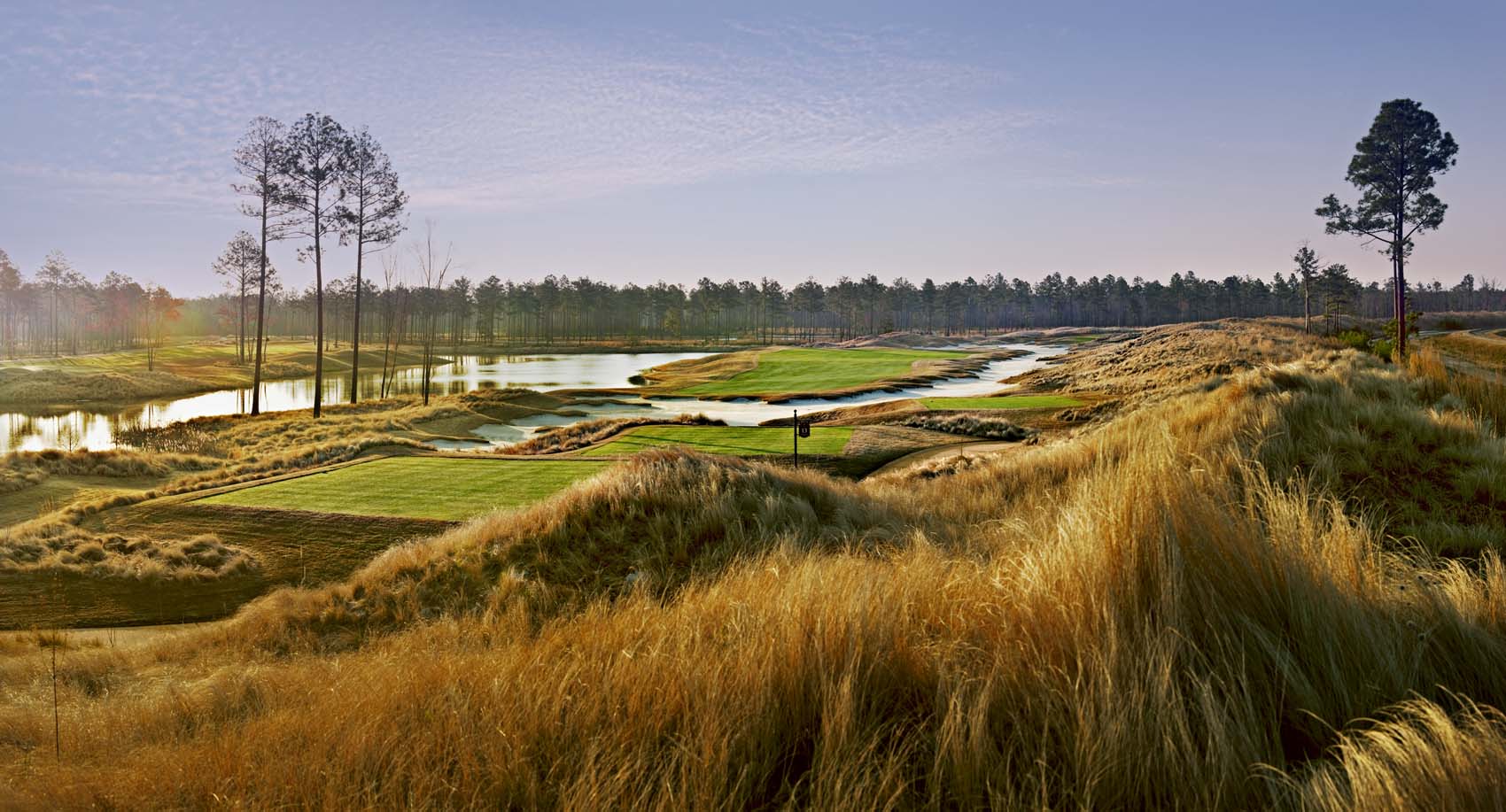 Leland has emerged as a sought-after relocation hotspot for families and retirees looking for small-town, North Carolina living. Its enviable location at the confluence of the Brunswick and Cape Fear rivers makes it perfect for water sports and related activities. Just minutes from downtown Wilmington and the airport, Leland is uber-convenient for golfers entering the Brunswick Islands from the north.

Anchoring Leland’s golf offerings are Compass Pointe and Cape Fear National, designed by Robbins and Cate, respectively. Cape Fear National is ranked among the state’s best courses by the North Carolina Golf Panel, Golfweek and GOLF Magazine. The 7,217-yard layout at Brunswick Forest is Cate at the top of his game: challenging but fair, visually stunning and memorable from first tee to 18th green.

Compass Pointe is one of the state’s newest courses, having opened in 2016, and is the centerpiece of a vibrant masterplanned community just 10 minutes from Wilmington. A former Nicklaus Design protégé, Robbins crafted Compass Pointe to play at a championship level from the tips while appealing to the development’s swath of retirees.

Magnolia Greens is Compass Pointe’s sister course featuring 27 holes designed by Tom Jackson. The three nines conjure images of the south’s most beautiful flowering trees and bushes: Azalea, Camilla and Magnolia. The Camilla-Azalea combo is the “championship” layout. Since its 1998 unveil, Magnolia Greens has been recognized as one of the region’s top values with rates around $50.

Part of the fun in planning a golf trip to North Carolina’s Brunswick Islands is researching and figuring out where to stay. The region is home to vacation rental homes, villas and condos, bed and breakfasts, and traditional hotels and motels. Multi-course venues like Sea Trail Golf Club and Brunswick Plantation offer on-site villas for stay-and-play packages. From foursomes to 40-player tournaments, there are options for any size group.

Once immersed in Brunswick County’s peaceful fairways, beaches, charming fishing villages and bucolic inland burgs, it’s easy to forget how accessible it is. The North Carolina population hubs of Charlotte, Raleigh-Durham-Chapel Hill (The Triangle) and Greensboro-High Point-Winston Salem (The Triad) are all under 3-1/2 hours away. The Washington, D.C. metro area is six hours, and Philadelphia and Pittsburgh are a day’s drive.

Golfers who prefer to fly can choose from Myrtle Beach or Wilmington International airports, depending on whether they plan to stay in the southern or northern portion of the county. Myrtle Beach has non-stop flights from a remarkable 50 cities via service from major carriers plus discount airlines like Porter, Allegiant, Frontier, Spirit and Sun Country. Wilmington connects to the traditional major East Coast and Midwestern hubs with legacy carriers like Delta, United and American.

Shane Sharp is a golf writer based in Greenville, S.C. A contributing editor with GOLF Magazine and former managing editor at TravelGolf.com, he spent a decade covering golf along the Grand Strand.

Shane Sharp is a golf writer based in Greenville, S.C. A contributing editor with GOLF Magazine and former managing editor at TravelGolf.com, he spent a decade covering golf along the Grand Strand.