in our southernmost corner of North Carolina, one of the South’s most intriguing natural phenomena occurs every fall through winter.

Named one of “10 Incredible Phenomena You Have to See in Fall” by Weather.com, the beaches of North Carolina’s Brunswick Islands have the rare distinction of running east-west as they parallel the shore. Beginning in late fall, this orientation means that you can sit on Oak Island, Caswell Beach, Sunset Beach, Ocean Isle Beach or Holden Beach and watch 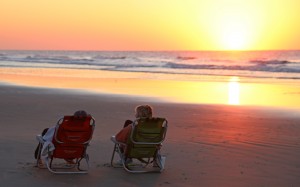 both the sunrise and sunset over the ocean without having to move your beach chair.

What’s the reason for the natural phenomenon and why does it only occur late fall through early spring?  To find the answer, we went to the experts – the folks who are on a first-name basis with the stars at the Ingram Planetarium in Sunset Beach.

The short answer, according to Ingram Planetarium manager Edward Ovsenik, is that, “Because our beaches are generally oriented to face south and since the sun is far enough south in the late fall through early spring, the sun appears to both rise and set over the ocean off our shoreline.”

But, why can’t you see the same thing in the summer, you ask?

“We say the sun rises in the East and sets in the West but this only occurs exactly in the East and exactly in the West at the Vernal and Autumnal Equinoxes, said Edward, who added, “When you think of the Earth revolving around the sun, the axis is tilted. As the Earth moves around the sun, the sun appears to move north and south of the equator by quite a number of degrees. At the Equinoxes the Sun is positioned over the Equator.  At the summer solstice, the sun is as far north as possible. However, in fall, winter and early spring, the sun is so far south of the equator that it rises not in the east, but southeast, and sets not in the west, but southwest.” 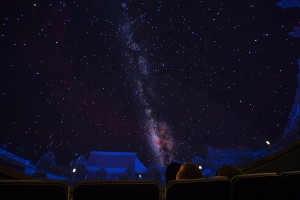 arium in Sunset Beach strives to stimulate interest in and a broader understanding of our earth, our solar system and our universe. The Planetarium even hosts star shows, laser music shows and programs about astronomy, science and space exploration throughout the year.

When you visit this fall a 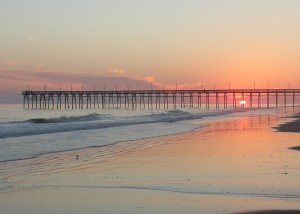 nd winter, take the sunrise/sunset challenge at North Carolina’s Brunswick Islands. Wake up early in the morning and experience the vibrant colors of the expanding sun as it climbs higher and higher, awakening the sky with every inch of radiance. Or, capture the last glimpses of daylight as the last effervescent tones of the sun expand over the vast horizon – all in the same day.

We are confident you won’t want to miss this bucket-list activity for it is one of the most scenic fall-nomena this season.